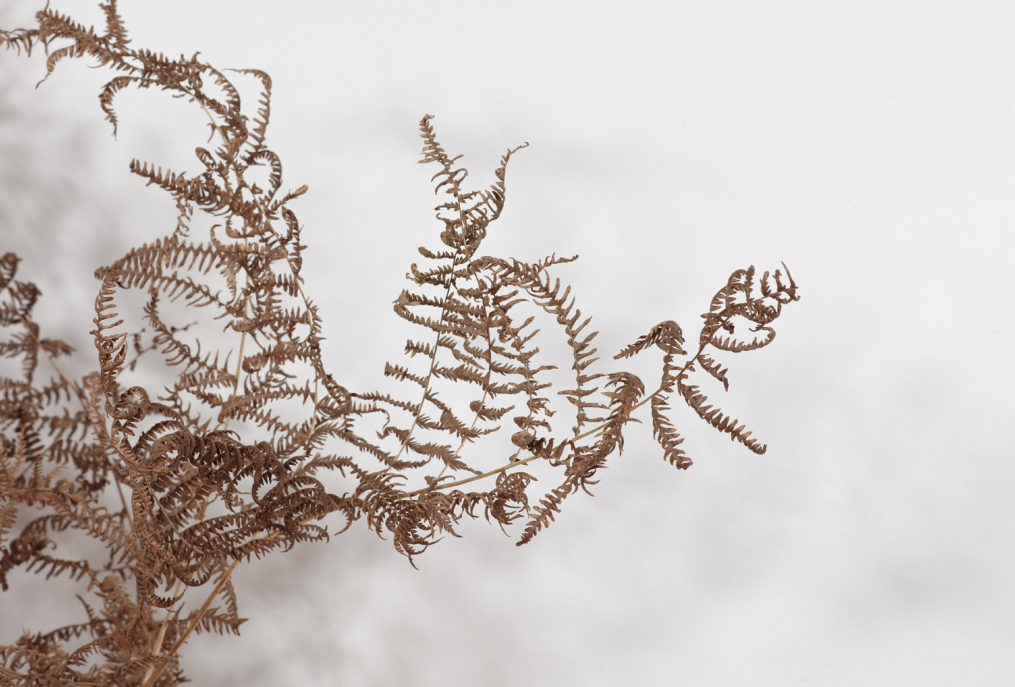 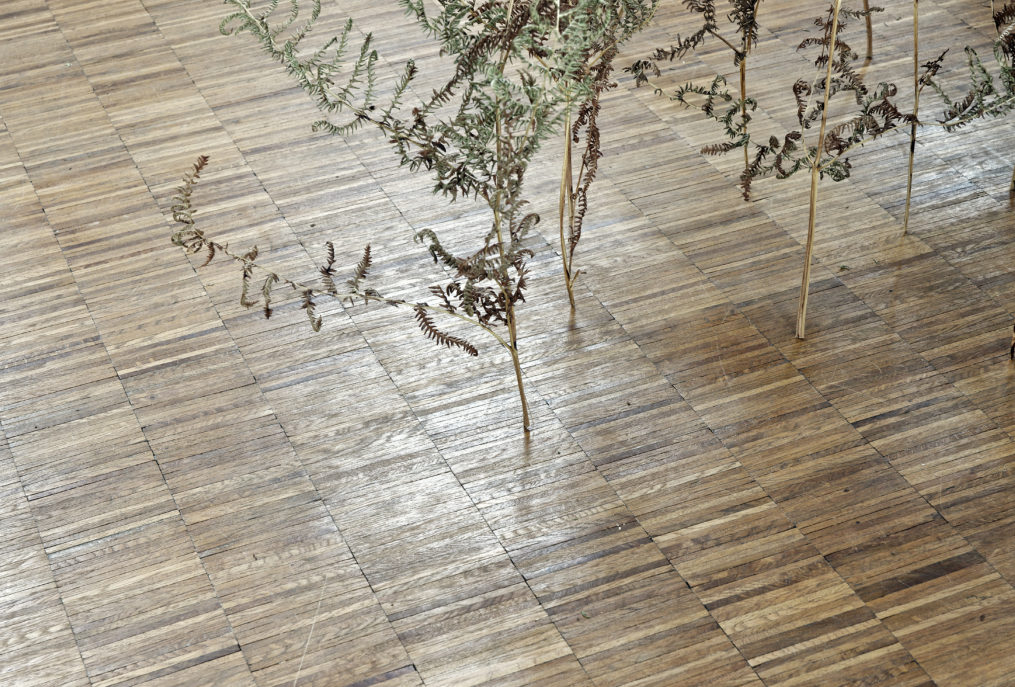 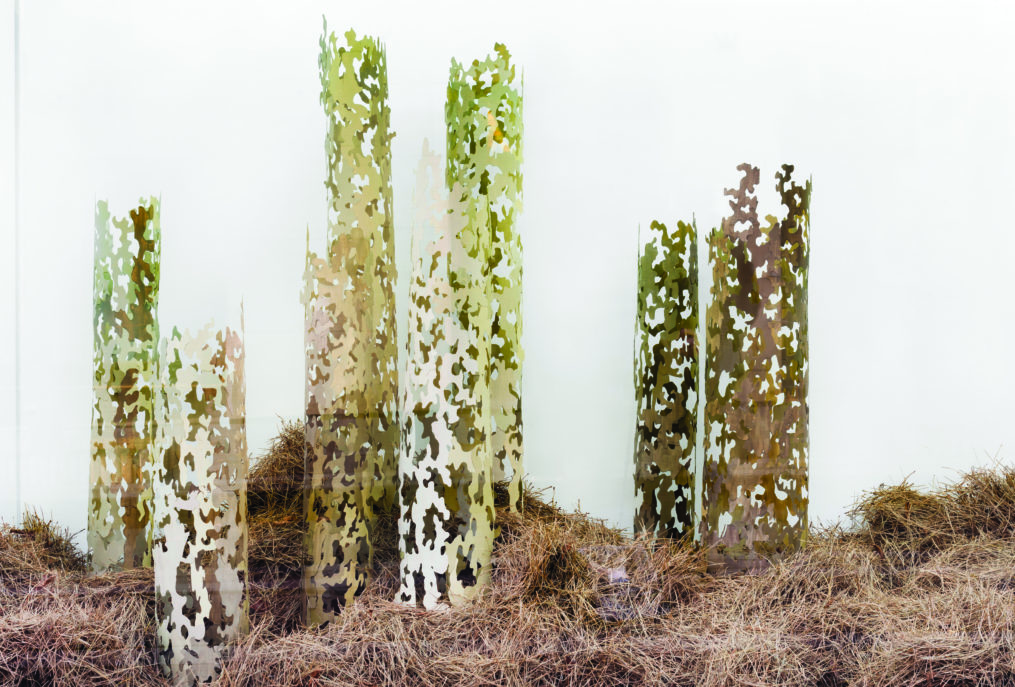 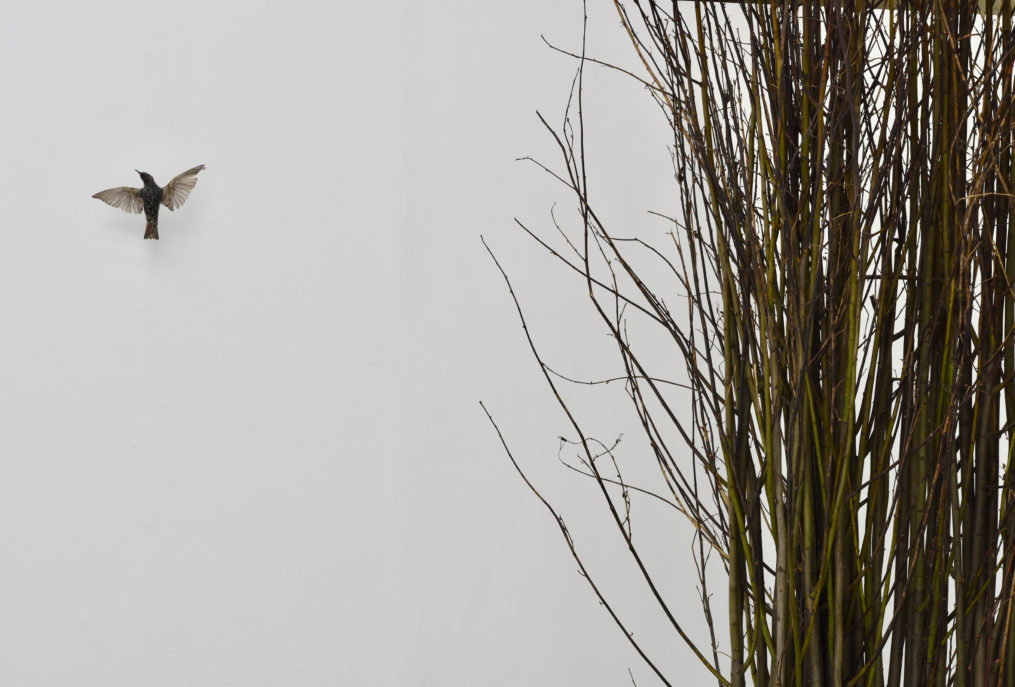 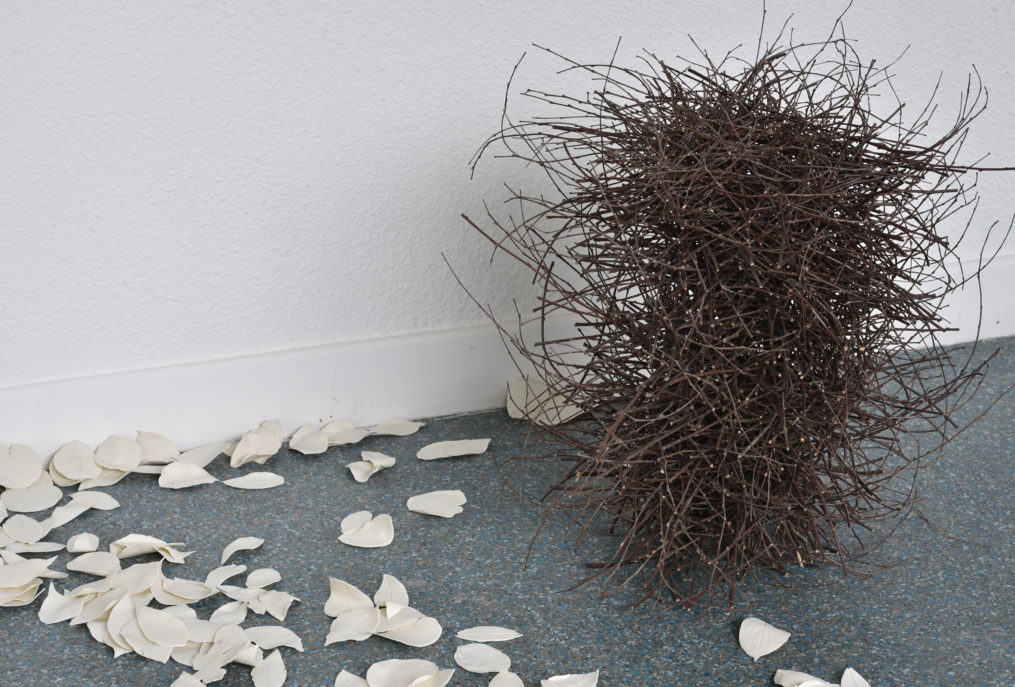 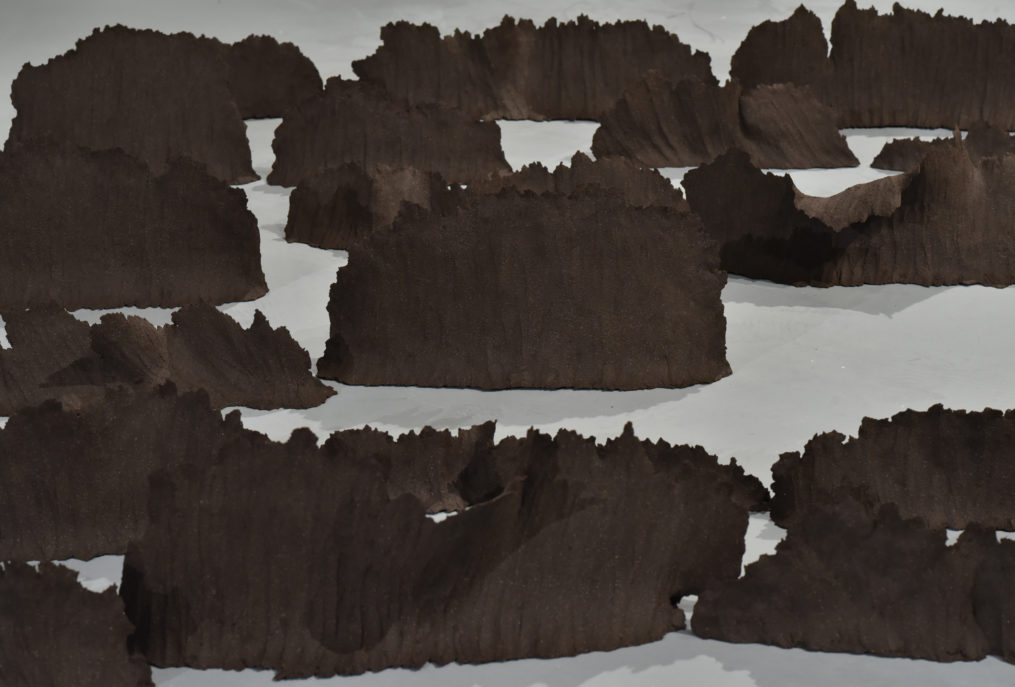 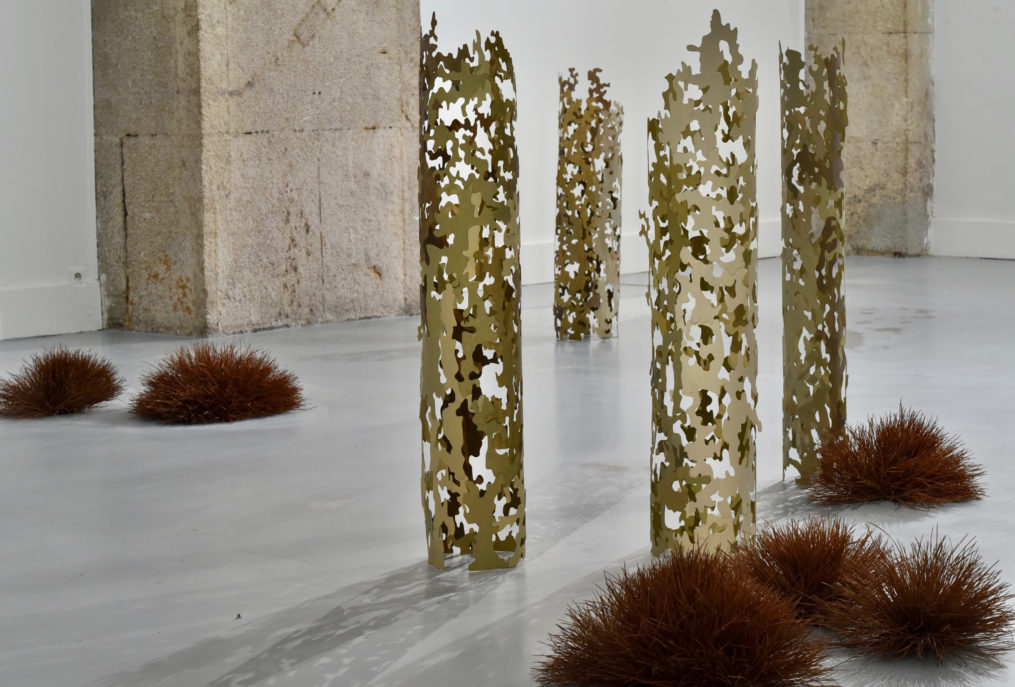 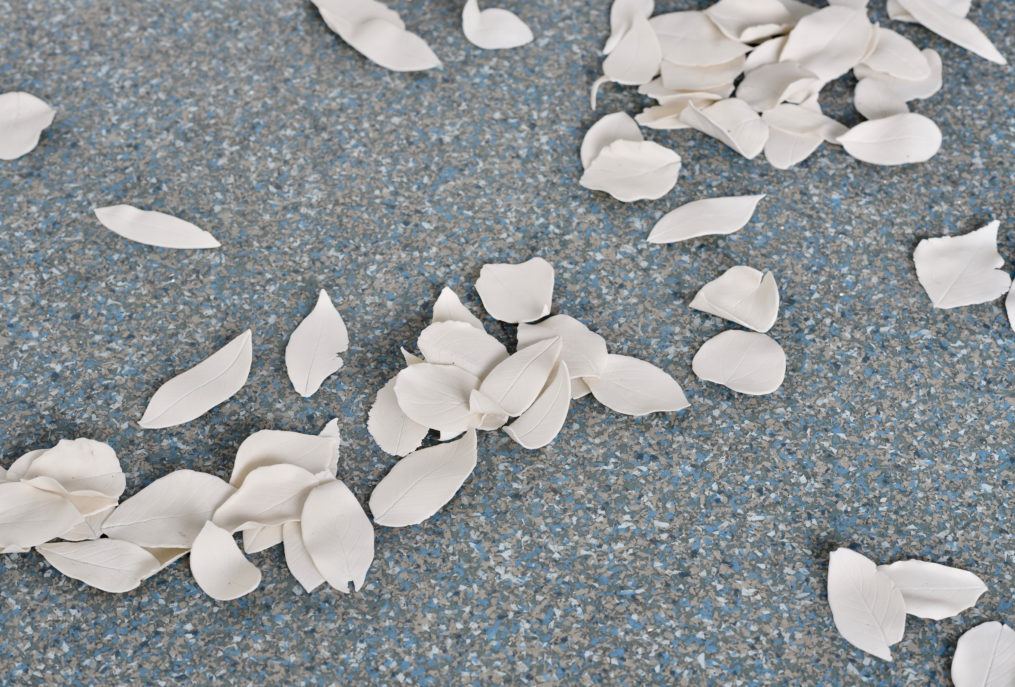 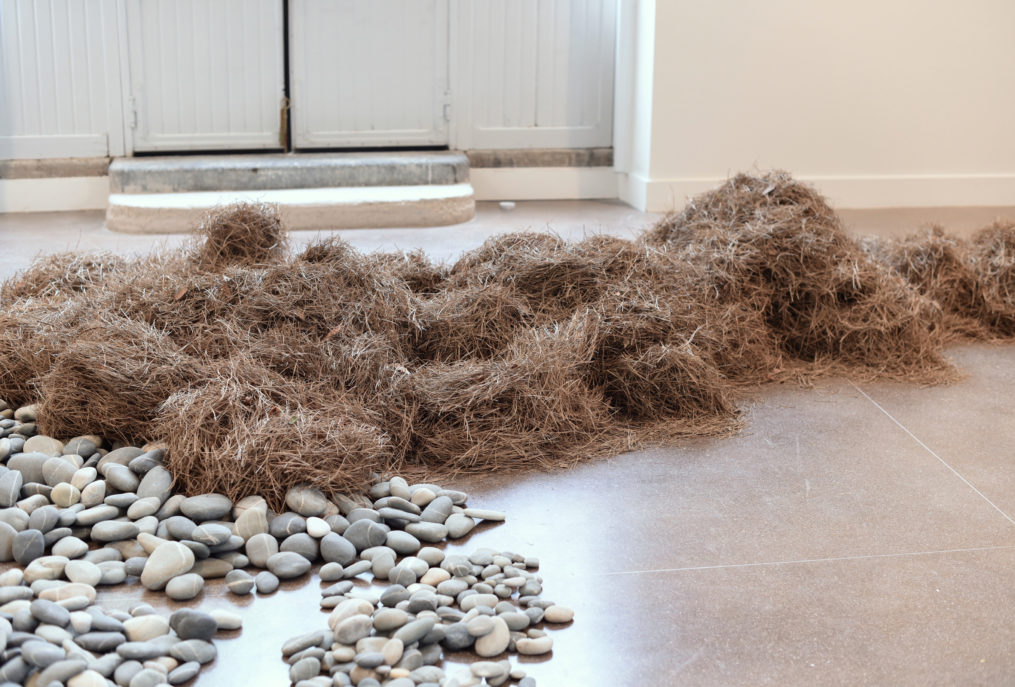 Dominique Ghesquière’s works are born of encounters between intersecting elements, whether they are found in nature, in the street or in our domestic interiors. Often taking the form of sculptures or environments, they bring everyday reality into the exhibition space, creating unexpected interactions and perceptions, incongruous set pieces that invite visitors to think again about their judgments, about the things they take for granted and to question the essential nature of things.

For this is not exactly trompe-l’oeil – rather the artist occupies an ambiguous position between truth and falsehood, and while Guy Debord taught us that “in a world that has really been turned on its head, truth is a moment of falsehood”, Dominique Ghesquière prefers to envisage a poetic reality that goes beyond that restrictive duality.

“Nothing is lost, nothing is created, everything is transformed”

With her exhibition at La Grande Place, the Saint-Louis museum of crystal, the artist proposes to take us right back to the origins of the constituents of crystal, the materials that are transformed in the production process. As visitors emerge from the main displays of crystal objects, Dominique Ghesquière presents them with ferns (whose ashes are a component of potash), forests, water, fire – as if these elements had suddenly sprung forth from the memory of the crystal to remind us of their vital existence.

Here, these materials do not share the exhibition space with the visitor – rather, like the crystal objects whose origins they symbolise, they are on show behind glass in the style of a vivarium: beyond a purely haptic interaction, the artist’s unusual use of space invites the gaze to slide from one sculpture to the next, the better to grasp the force of nature that underpins all the operations in the production process going on in the factory adjoining the museum.

Reminiscent of the saying attributed to French chemist and philosopher Lavoisier, “Nothing is lost, nothing is created, everything is transformed” and inspired by directly by land art, Dominique Ghesquière’s works recall and reveal the material, territorial dimension of crystal in an act that is at once archaeological, infinitely delicate and shrouded in poetry.

Imagine for a moment that the decanters, vases and millefiori paperweights that fill the shelves at La Grande Place, the Saint-Louis museum of crystal, with their sparkling colours were produced by acts of magic, divination or witchcraft. They would be there like a sort of archaeological relic of past rituals, whose origins and secrets we need to discover. An enigma to which three artists in turn would propose their own poetic solution, whilst at the same time opening up new mysteries…

“L’héritage des secrets” (“Legacy of Secrets”) is a series of three solo exhibitions that draw on the historical, architectural, but also aesthetic, technical and human background of a museum that tells hundreds of years of history. In the beating heart of the workshops next door, skills are passed down the generations through gestures learned and perfected through a long process of initiation. The guest artists have immersed themselves in the singular world of crystal making and produced works that reflect it, whilst diffracting its meaning as crystal diffracts the light that passes through it.

The programme of exhibitions at La Grande Place: Saint-Louis Museum of Crystal

This solo exhibition by Dominique Ghesquière is the latest in a programme of temporary exhibitions at La Grande Place: Saint-Louis Museum of Crystal sponsored by the Hermès Foundation, in line with its productions in its own exhibition spaces (Brussels, Singapore, Seoul, Tokyo) and in conjunction with major museums (“Formes simples” at the Centre Pompidou-Metz, “L’Esprit du Bauhaus” at the MAD, Paris).

Every year the Foundation sponsors two exhibitions dedicated to contemporary creation seen through the prism of know-how. These themed exhibitions have been designed in collaboration with a Lorraine-based cultural institution and with the participation of Cristallerie Saint-Louis, for a series of three consecutive cycles of events. After a first and second cycle curated at the Centre Pompidou-Metz and at 49 Nord 6 Est – Frac Lorraine (Metz) respectively, the Foundation has commissioned the third cycle from the La Synagogue de Delme Contemporary Art Centre in Moselle.

Some other news
for you